A SINGLE WORD FROM SCRIPTURE THAT GAVE NEW VITALITY TO MY CHRISTIAN LIFESTYLE!

Recently, I woke up in the middle of the night with a single word from the New Testament more or less “flashing in lights” in my mind. It was the word DISCIPLE.

I realised immediately that “disciple” was not a word I have used very much, in my thinking, or my conversation, or my writing – and yet it is a word that was quite often on the lips of Jesus. It dawned on me that it was a biblical word I had been neglecting.

How (I asked myself) would I define the term “disciple of Jesus”? When I came to think about it, it actually seemed a stronger term than either “Christian” or “Believer” – words that, up till now, I would have used much more often. Well over half the British population still describe themselves as Christian, in censuses or on official forms, though one can’t help doubting if that really means “committed Christian”. Even the word “believer” can indicate a person who gives theoretical assent to the existence of God and Jesus, without giving personal allegiance. (As the apostle James says: “Even the demons believe”.)

The phrase “Disciple of Jesus”, however, speaks of a full and rounded relationship. It speaks, for instance, of closeness. Jesus’ first disciples were his constant companions. He talked about his true followers being “yoked” to Himself. Discipleship speaks, too, of learning. The ‘twelve’ very much thought of Him as their Teacher. Then again, obedience ranked highly in the relationship between Jesus and the original disciples. They did what He wanted, whenever He asked. They called Him “Lord” and “Master”. Finally, the word disciple seems to me to speak of love. Very few people stick so closely to someone else, on a day-to-day basis, hanging on the other person’s every word, if some kind of love is not involved.

I am writing this just after the 2012 Olympic Games, which have been held in London, where I live. One of the features I noticed, in the coverage of the Games, was the relationship of many of the participants with their coaches. It struck me that it was often very similar to discipleship: a great deal of time was spent together; there was teaching and learning; there were very specific instructions given along the way; and there was frequently great respect and affection from the athletes for those mentors who had helped them “run well” (or whatever they did). If Christians are – in the language of the apostle Paul – to “run well”, they need to see Jesus as their Great Ever-Present Coach, and not just to have a loose acquaintanceship with Him. That’s what the word “disciple” implies.

Certainly, I am finding it very helpful, personally, to think of myself, above all, as a “disciple of Jesus” – in preference to all the other terms I have been accustomed to use: Christian, Believer, Follower of Christ, and so on. I mustn’t let Him out of my sight! I must go on learning from Him, and I must expect a flow of specific instructions, and really act upon them! As He has coached me through life, I have already built up huge respect and love for Him, but it would be sad if I let familiarity dull the edge of my excitement, when, yet again, I see one of His lovely plans coming together! He’s my supreme “Life-Coach”. I AM HIS DISCIPLE.

Let me share with you two final thoughts that you might find relevant to your own situation. One of the things Jesus coaches me in is: love for others. Furthermore, part of that love is that I should want those “others”, with whom I come in contact, to commit themselves to Jesus. I am called upon to bless others in every possible way, and every means of blessing others is definitely important. Nevertheless, to be involved in pointing people to commitment to Jesus is the very best help we could give them for time and for eternity. When I am involved specifically in that, however, I must remember the words of Jesus at the end of Matthew’s Gospel: “Go and make disciples of all nations”. He doesn’t say “Make Christians” or “Make Believers” – He says: MAKE DISCIPLES. We have so often, in the past, aimed too low. We have been content if individuals accepted a formula of belief, or joined our particular group. We have not aimed at making followers who will act (and go on acting) as disciples – seeing themselves yoked to the Divine Life Coach on a day-to-day basis.

My other final thought is this: As a Christian who follows Jesus outside the “Organised Church”, I am often asked to “identify myself properly”! Other Christians (and even other non-Christians) want me to give some descriptive name to myself. They don’t seem to be satisfied if I say “I am simply a Christian” or “I am simply a believer in Christ.” I think that, in the future, I shall opt for saying “I am a disciple of Jesus” – because I can enlarge on that, along the lines of what I have just written. I can explain what a disciple is.

I know, of course, that there are plenty of “disciples of Jesus” within the Institutional Church, as well as outside it, so it is not a term that explains why I am no longer involved with “organised religion”. Nevertheless, I believe it is a worthy description of many of us who are sincerely following the Lord “outside the camp”, and why we do so can be explained separately, if necessary.

The term ‘disciple’ was, of course, always known to me. What I have done recently, however, is to bring it into much greater prominence in my thinking about my own response to the Lord. I pray that thinking of yourself, specifically, as a DISCIPLE, UNITED DAY-BY-DAY TO OUR WONDERFUL LIFE-COACH, will be as much of a blessing to you as it has been to me.

WELCOME – AND SOME INFORMATION FOR NEWCOMERS TO THIS WEBSITE

My name is Stan Firth (pictured below with my wife, Mavis) and I have set up this web- site to encourage Christians who, like ourselves, and thousands of others, are committed followers of the Lord Jesus, but are serving Him outside the “Organised Church”. 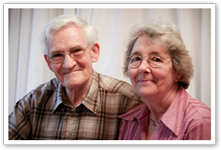 I should explain that I don’t put something here with any particular regularity (e.g. weekly, or monthly). I only write when I feel strongly that I have been given something important to say. As a result, this website is simply a LIBRARY, or STOREHOUSE, of articles/blogs/sermons (or whatever you like to call them) written to strengthen and stimulate “outside the camp” Christians.

Some people have been put off by the lack of a regular contribution from me. However, I offer the facility of letting individuals know, by e-mail, whenever something new appears. If you want to take advantage of this, go to the CONTACT THE AUTHOR page, and let me put you on the list.

You can also use the CONTACT THE AUTHOR page, to comment on, or ask questions about, any of the articles - or about anything else that seems relevant to our alternative Christian lifestyle. If what you say seems to need a response, I will certainly e-mail you back. In some cases, what you submit may lead to an article of encouragement or challenge, or to an answer on the FAQ page.

AN EXPLANATION OF THE WEBSITE’S NAME

The name of the website - “The Remarkable Replacement Army” – comes from a book with the same title that I have written. The book reveals a biblical alternative to the lifestyle of the Organised Church. (Don’t worry! It doesn’t paint a ‘militaristic’ picture. It simply uses a true story from History as a parable for what the Scriptures sometimes represent as “The Army of the Lord”.) There is much more information on that book, and another relevant one I wrote earlier, in the “About the Books” page.

Since writing these books, however, personal experience, further biblical study, and continuing contact with others of similar conviction, have all provided me with an on-going flow of encouraging material, and that is what I shall go on sharing on this website.

Click on the image above. This will open a new window in lulu.com where you can complete your order.

Click on the image above to download the FREE PDF version. Please note that you may need to install Adobe Reader in order to view the file.

THE OTHER BOOK BY STAN FIRTH

More Information About the Book:

Encouragement, from the Scriptures, for committed and enthusiastic Christians who are no longer connected to the "Organised Church" - with some answers for those who might feel critical of them. (The issue is: What are Christ's COMMANDS, and what are merely Christian CUSTOMS?)

THE MOST RECENT “WORDS OF ENCOURAGEMENT”